Hair Is Too Nappy For The Workplace? | Natural Haircare News 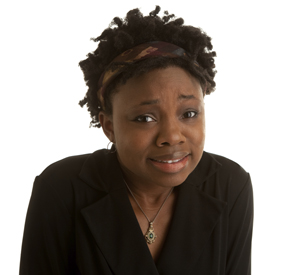 According to her post on the “I Hate Starbucks” blog, the comments lasted for several hours.  The woman’s complete forum post can be found below.

Read it and post what you think below or on Natural Haircare News on Facebook. What advice would you give this woman?  How would you have handled this situation if it happened to you?

My Manager Told Me My Hair Was Nappy

I am a black female who works at Starbucks, and the other day my rubber band broke on the way to work and so I was forced to wear my naturally curly hair out (its kind of a fro) when I got to work I was working with my boss and the assistant manager, a Hispanic man (who is gay), and a white man, my boss, took one look at my hair and started teasing me about my hair being a “mess” and “nappy” and “Madame CJ walker would be ashamed of my hair”.

At first it was kinda funny but after three hours of the constant teasing and the uncomfortable looks from customers when they made joke after joke about my hair and blackness it got old really fast.

After going to take out trash to cool down from what I felt was an utter humiliating experience my assistant manager tries to smooth things over by making a joke that my manager is just jealous of my hair because he wants it but I was already pretty angry so I kind of just did my job and ignored them. When my one of my friends heard what happened she was enraged and told me I need(ed) to call the hotline and tell someone what they did… I don’t know what to do because I want something to happen to be done about this, because this isn’t the first time this has happened, sometimes they make really rude comments and stereotypes about me being black and its really hurtful.

Linkedin
Tagged with: nappy hair • natural hair in the workplace