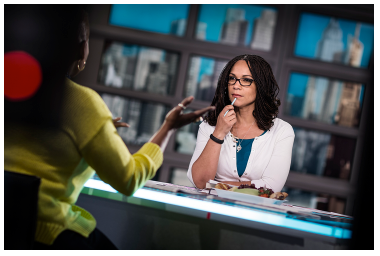 Ms. Perry reflects on her own hair and the societal preoccupation that people have with ethnic black hair in general as part of a forward for the book:  “Hair Story: Untangling The Roots of Black Hair in America,” authored by by Ayana D. Byrd and Lori L. Tharps.  Here’s an excerpt:

The first part of my personal hair journey is probably very much like that of many other little black girls, in that it was hours on the weekend washing and parting and greasing my scalp, and then getting braided styles. One thing to know is that I am and always have considered myself African-American, but I have a white mother. And this has meant absolutely nothing for the texture of my hair. I knew the interracial girls that had hair that fell down in ringlets, but that wasn’t my experience.

“People always talk about the white mom and the interracial child whose hair is not groomed in the way it would have been groomed with a black parent, but my mother understood how important it was, and she learned how to take care of my hair”…

You can view the complete commentary in the original Slate article.  It’s a great read!