Teyonah Parris on Her Natural Hair: It Looked Nothing Like ‘What I thought was beautiful’ | Natural Haircare News

Teyonah Parris on Her Natural Hair: It Looked Nothing Like ‘What I thought was beautiful’ 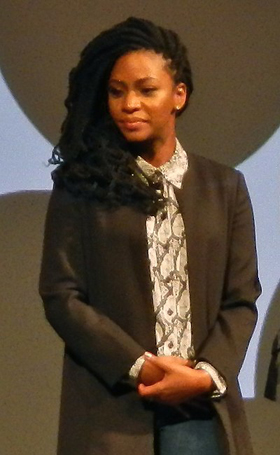 As we are all too aware, many black women have no idea what their natural hair looks like until much later in life because from a very young age, we have been taught to tame our hair; almost as if our hair must be kept hidden and controlled.

“Mad Men” actress Teyonah Parris admitted in a HuffPost Live interview that she did not have any idea of what her natural hair looked like until she decided to challenge herself to go natural.

It has been a life altering journey.

At first she tried to “be what she saw” in Hollywood. Needless to say, what she saw were women with straight hair.

But she had her first recognition of the beauty of natural hair while walking down a street in Harlem with her girlfriend. It was on that walk that she saw a black woman whose beautiful natural hair really resonated with her.

She commented to her friend that she couldn’t believe that she could have natural hair that looked like the woman that she saw on the street because when she washed her hair, it was straight. Teyonah recognized a look of utter disbelief from her friend who reminded her that her hair was straight because she permed it…

It was her “ah ha” moment. She realized that she was not used to seeing her natural hair. It was the beginning of her journey towards embracing her ‘real’ hair.

The road wasn’t easy by any stretch of the imagination.

According to Teyonah, the journey towards self-acceptance was a very emotional one and when she finally saw what her hair looked like in its most natural state, she cried!

“I cried, I cried… it was such an emotional experience and it wasn’t just about hair. It was what my perception of beauty was and had been for all of my life and then I look at myself in the mirror and I’m like, ‘That doesn’t look like what I thought was beautiful.”

She was “in shock” and did not want to go outside. Her friend who had been with her on that fateful day in Harlem actually had to come to her home and coax her outdoors.

Needless to say, from that moment on, there was no turning back for this actress who has been rocking her natural hair in various styles ever since.

Fast forward, Teyonah is continuing to work on being her best self and part of that is changing how she views beauty.

You can watch her full interview on HuffPost Live here.

(Note: The interview focus is primarily about Teyonah’s journey as an actress. The conversation about natural hair starts at 18:25 into the video. It was great getting to know more about this talented actress).

When did you first realize how beautiful your natural hair is? Share your story in the comments section.