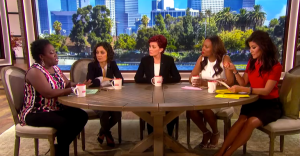 Image from “The Talk”

A while back, we shared a story on the swirl of controversy surrounding comedian Sheryl Underwood’s comments on the show The Talk about natural hair.

Underwood is one of the co-hosts of The Talk, and back in 2013, she referenced afro hair as being “nasty”.

To be fair, let’s put the comment into some context. In response to a story on Heidi Klum where Heidi describes saving the hair of her biracial children, Sheryl chimed “Why would you want to save afro hair?” She continued to state:

“You can’t weave Afro hair, you don’t never see us at the hair place going, look here, what I need, I need this curly, nappy, beady hair, that just seems nasty.”

And the icing on the cake comment in response to another co-host that the host also saves her children’s hair:

[Sarah Gilbert’s kids] “…probably have that beautiful, long, silky stuff… that’s not what an afro is.”

To Sheryl’s credit, she did apologize on the Steve Harvey Show for her comments but it left a bad taste in many mouths.

Fast forward to 2015. It seems that time can mellow viewpoints. Recently, Sheryl revealed her own natural hair live on her show “The Talk” and more importantly, Sheryl shared a powerful apology to the black community:

“I made some statements that were not only wrong, they hurt our community and when I say our community black people are very sensitive about a discussion about our hair. And in my comments and trying to explain but it was juxtaposed against statements that were very very hurtful. And to come out of the mouth of a very proud black woman… I was wrong. And I wanted to take the time to apologize; especially in the forum that this discussion occurred; because there was a lot of backlash…”

Is her apology 2 years too late or does it even matter? We learn a lot through retrospection. Watch the full five minute video to hear the rest of Sheryl’s extremely powerful apology.

One Response to Sheryl Underwood Apologies for Negative Comments on Afro Hair, Reveals Her Natural Hair on Air [Video]