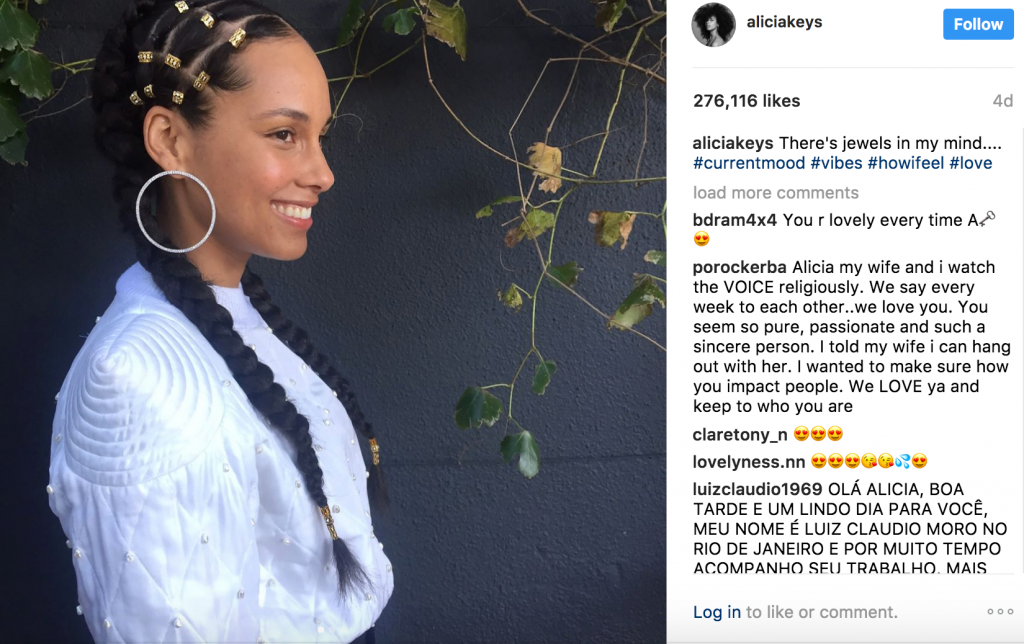 Everyone knows braids and Alicia Keys go together like peanut butter and jelly. Recently, Mrs. Keys posted three Instagram photos of her hair in small rubber band sections that went into two braids. The sections and braids were decorated with gold cuffs. The singer wore a beautiful white blouse, hoop earrings, and pearly whites to match.

Some of Alicia Keys’ gold braid cuffs looked like they had diamonds on them! In her caption, the singer said, “There’s jewels in my mind…” She’s been a trendsetter since her debut album “Songs in A Minor”  in the early 2000s. Girls and women around the world became inspired with her beaded cornrows  in the videos for “Fallin’” and “A Woman’s Worth.”

Everywhere you turned, there was someone rocking the same or similar style to A. Keys. One young singer by the name of Jamia Simone Nash (now known as Jamia) appeared on the Apollo stage looking like a little version of Alicia Keys. She even sang “Fallin”! Too cute!

Braids with silver, gold and other cuffs is a style that has been spreading like wildfire, but I’ve never seen anyone with diamonds or rhinestones on their cuffs. We’ll see if it catches on! In the meantime, we’re loving it!

Last year, Alicia Keys started a “no makeup” challenge. Celebrities like Tamron Hall and Gabrielle Union joined the “In Common” singer in wearing no makeup in public. Alicia Keys is currently finishing her final season as a judge on the popular NBC show “The Voice.”