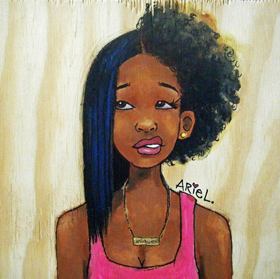 Sista, when did you get your first perm? The perm has been a stable within the black community for about a century. Every black woman and their mama has been (or tempted to be) exposed to “creamy crack.” The natural hair movement is in full swing now but some sistas is still perming their hair despite proof that it damages it long-term. So why did this phenomenon begin in the first place?

The Origin of Black Women Getting a Perm

Before the end of slavery, black hair was deemed unattractive. Instead, the beauty stand was long, silky hair like that of white people. Renown white supremacists such as former president Thomas Jefferson set this precedent.

After slavery, the same ideal remain intact. The coarse, kinky hair of black people was considered unacceptable and unprofessional, especially within the workforce. African American women (and some men) began conforming to the traditional hairstyles of White American women to gain acceptance. They would use hot combs to straighten out their hair. However, most black women discovered that their hair would not cooperate with this method. This led many to use hazardous perms and wave creams that is still being used to this day.

Why Black Women Are Still Getting a Perm Despite Its Damaging Effects????

It’s a mystery to me why some sistas will wear perms after seeing what it has done to other sistas’ hair. They go from looking like Halle Berry to Shaq in an instance! All jokes aside, long-term perm usage can cause:

As you can see, perming is not only deadly for your looks but your health as well. While the pictures of the beautiful sistas rocking shiny, silky hair on the perm kit box looks enticing, going bald isn’t. The only reason most black women continue to perm their hair is to assimilate with White culture, especially within the workforce. (The same thing they was doing post-slavery) If it wasn’t for that, then more sistas would rock their natural hair.