Empowering Our Girls Through Play 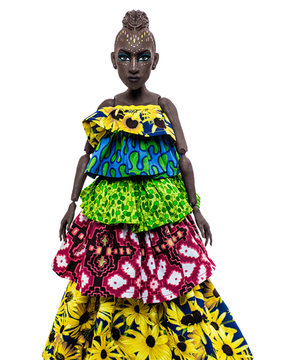 A Mara Warrior Doll by Royelles
(Photo from kickstarter.com)

Self-love isn’t as easy a concept to embrace for some people as it is for others. While each one of us should inherently value ourselves, it can be difficult to do if you’re not exposed to loving messages, especially from an early age. The groundbreaking study, “The Doll Test”, conducted in the 1940s, showed just how deeply biases can go when kids aren’t exposed to positive images of themselves.

Fortunately, for today’s black girls, there are more dolls of color available, and one line, Royelles, is waiting in the wings to make its big debut. Múkami Kinoti Kimotho began a Kickstarter campaign to design a line of black and brown dolls, who wear African print-inspired fashions, in response to her young daughter Zara’s desire to have straight hair, instead of her natural texture.

“For girls as young as Zara wanting to change those elements about herself, I thought that’s what we need to do something about,” Kimotho told USA TODAY.

Kimotho wanted her daughter to play with dolls that resemble her, but she wanted more than physical dolls; the mom took it a step further by creating an app that includes educational games and e-books related to the dolls. Dolls in the Royelles line are called “avatars,” and it simply puts a high-tech spin on diversity and providing more toys for children who want playthings they can relate to.

The dolls, or avatars, are more than toys that girls can dress and play pretend with. Each avatar is a fully fleshed-out character, so one is a warrior princess, while another is a tech company’s CEO. Kimotho settled on the term avatar because she sees the toys as more than simply dolls — to her, they’re superheroes.

As of this writing, the Kickstarter campaign is about a fifth of the way to reaching its goal. Want to know more and contribute to a revolution seeking to empower black girls through play? Check out Royelles on Kickstarter.