At the tender age of 15, Skai Jackson is one of the biggest natural hair inspirations in Hollywood! Plus, she has style! Jackson’s braid-out was put into a messy bun, and the front of her hair was swept to the side resulting in a cute and easy natural hairstyle. The actress posted a photo of it on Instagram. She also posted a video of her wearing box braids down her back. 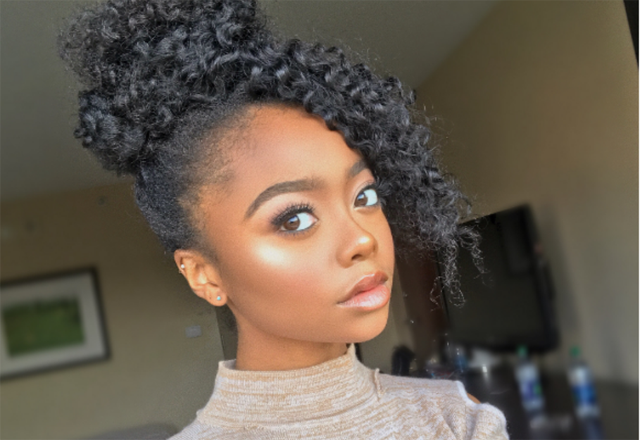 From 2011-2015, Skai Jackson played the character Zuri Ross on the Disney Channel show, Jessie. The actress currently plays the same character on the Jessie spinoff show called Bunk’d. Even though Jessie ended in 2015, Skai Jackson can be seen in reruns sporting gorgeous braid-outs. The fact that she wears her hair natural on those shows helps other little girls have pride in wearing their natural hair too. It also gives moms ideas for natural hairstyles for their little ones.

On Sunday, October 15, 2017, Skai Jackson launched her Nowadays clothing line at Macy’s. The clothing line will feature sizes 7-16 for girls and sizes 1-5 for juniors. Jackson shared her inspiration behind the collection. On Instagram, she said, “What inspired me for this collection was to make clothes that girls could have fun wearing, and mixing and matching.”

Jackson was also an ambassador for Teen Vogue at this year’s New York Fashion Week. We salute Skai Jackson, the fashion and natural hair icon! When my hair gets longer, I’ll have to give her bun and side-swept bang a try!