Fans in Disbelief that Angela Simmons’ Natural Hair is Hers? 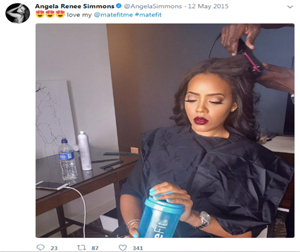 Recently, Angela Simmons posted a photo of her natural hair. While many fans were happy to see Ms. Simmons progress, others were skeptical. The designer’s hair came past her shoulders. In the caption, she said, Late nights!! Natural Hair Vibes!!

One of Simmons’ fans said, “That’s not your hair. [sic] Stop lying to people.” In addition, one of their hashtags said “fraud” and also included the name of a line of hair extensions Angela Simmons promotes on social media. The same day, Simmons shared another Instagram photo of her natural hair while holding up products from the new line by Curls called Cashmere and Curls. One I.G. user replied, “So not your hair.”

Through the last several years, the Growing Up Hip Hop star has been transparent about her hair journey – extensions or not. In 2011,  Angela Simmons revealed her big and stretched Afro after taking out her weave. In 2013, she tweeted a picture of her natural hair in a ponytail. She said, “The diary of natural hair!..”

In an article shared by the Fashion Bomb Daily, Simmons said she kept her hair braided and weaved up. She uses sew-in weaves to retain the length of her natural hair. We don’t think that’s so hard to believe, but everyone is different. Plus you know if you post a hair photo, 9 out of 10 times, people are going to figure out if it’s really the person’s or not. So, it’s to be expected! We’re loving the hair growth, Angela!