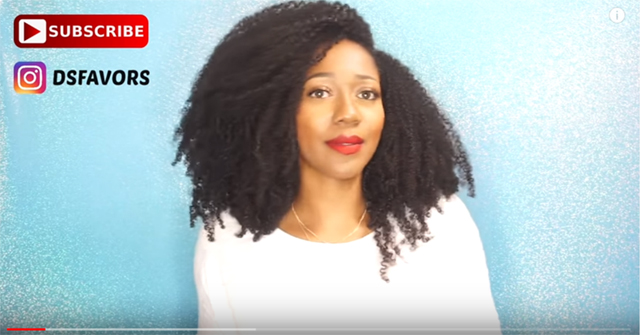 There is an abundance of advice going around the natural hair community and YouTuber, DSFavors wants us to be careful! In her video, “Natural Hair Gurus Exposed” the YouTuber affectionately known as DeeDee, tells us several things to watch out for when watching natural hair videos.

One of the biggest points DSFavors made in her videos that I agreed with wholeheartedly was that you should be honest and genuine in your videos. The YouTuber stated there were natural hair gurus who use relaxers but say it’s their own hair. I was not aware that this was going on, but I guess anything is possible!

How are you going to give someone advice on natural hair when you can’t be honest about what you’re doing with your hair? DSFavors said, “If my hair wouldn’t lay down on the side and all that other stuff, and I had to put a texturizer on my edges to make them lay down, I would say that…” She continued by saying, “But don’t be coming out making videos, talking about you lay your edges down with juices and berries and honey when you knowing you done put a little texturizer on it… Just say it.” Agreed!

Another point, DSFavors made was you shouldn’t follow what everyone else is doing just because it’s popular. The YouTuber made a reference to so-called hair growth methods like the inversion method which involves massaging your head with an oil and turning it up-side-down.

Most of you might already be aware of sponsorships that bloggers and vloggers are offered to test products. DSFavors said she believes your honest opinion should be given about the products, and I agree. She understood the fact that some YouTubers’ main source of income is YouTube, so they might not be in a position to give their real opinion of the products, but DSFavor said she is not one of them.

DSFavors’ video “Natural Hair Gurus Exposed” is a great video that will help naturals pay more attention to the information they’re receiving for their natural hair journey. Not only does the video apply to YouTubers, but I think it also applies to bloggers!