YouTuber Does Big Chop in Vietnam! 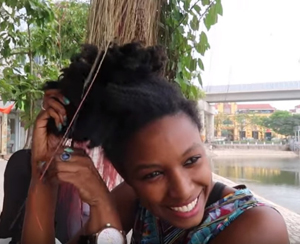 YouTuber and world traveler CharlyCheer did the Big Chop on the streets of Hanoi, Vietnam. The 31-year-old’s natural hair locked into a sort of side bun because she hadn’t been taking care of it.

After mustering up all of the courage she could, CharlyCheer sat next to the barber and used his scissors to chop off about 8 inches of her hair. When she pulled down her first twist in the front of her hair, I was shocked because it was about a foot long!

While cutting her hair, the YouTuber joked about needing to buy the barber new scissors because she was trying to cut through her locs. CharlyCheer’s friend was having a field day watching her do the Big Chop! She was showing off the  lovely view in front of the water. She was also supportive, and I think that’s exactly what the YouTuber needed to go through with her Big Chop.

After CharlyCheer sat in the barber’s chair, he began to shave off her hair. The traveler was having a tough time with the idea of cutting the front. There was a man passing by who stopped to give her some encouragement, and I think she needed every bit of it because she was super nervous!

In the end, the barber left the section of hair in the front, and CharlyCheer pinned it up into a pompadour. Her friend’s translation of the barber’s suggestion was that she would look ugly if he cut off all of her hair. That was not true! I think short hair looks nice on the YouTuber.

In the end, she was happy with her results. I applaud CharlyCheer for her bravery. Let us know what you thought of the video!