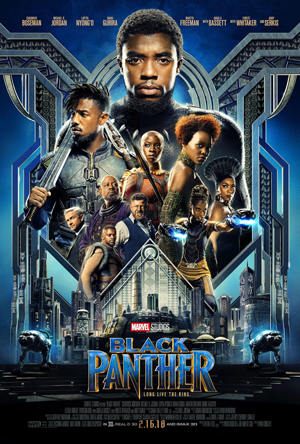 Image via Wikipedia. This is a poster for Black Panther. The poster art copyright is believed to belong to the distributor of the film, Walt Disney Studios Motion Pictures, the publisher, Marvel Studios, or the graphic artist.

Black Panther is the first, all-black cast movie with the representation of a black superhero to hit the silver screen. The movie has become more than entertainment. It seems to have awakened a deep-rooted sense of pride in African heritage. Across the nation, many of color poured out to see the film, decked out in an array of beautiful dashiki-inspired wear. This may have been kick-started by some of the amazing fashion we saw the actors wear for the red-carpet premieres.

Beyond the fashion was the variety of natural hairstyles donned by the cast. Here are some personal favorites from various Black Panther red carpet screenings across the globe:

Lupita Nyong’o- At the South Korea screening of Black Panther, Lupita looked like a stunning Empress with her hair cropped short and natural, covered by a thin layered gold headband. She finished off the look with a vibrant matte red lipstick. This is a great look to mask a bad-hair-day.

Letitia Wright– Letitia was turning heads at the Hollywood premiere of Black Panther with soft, subtle curls in her natural hair and a side part. This look was very reminiscent of nineties cuts, which are making a strong comeback in 2018.

Danai Gurira– Danai embodies the term ‘I am not my hair’ while rocking a short, cropped cut after going fully bald for the film. For the London Premiere of Black Panther, the beautiful actress opted to cut a pattern into her haircut- fashioned after the tattoo that she has on her head in the film. The result was sharp, yet soft with an edgy and trendy flair.

Angela Bassett– Whenever Angela shows up, the expectation is nothing less than glam. For the Hollywood premiere of Black Panther, this powerful sister delivered big time. She rocked a gorgeous yellow fringe dress that reminded you of when she played Tina Turner on screen. Angela went with a long, kinky-curly look that partnered perfectly with the dress.

Lupita Nyong’o- Her beauty and effortless style are hard to ignore, so she deserves an additional mention. She looked amazing at each feature for the film, but in NYC Lupita opted to wear her hair in natural fro puffs, or fro ‘knots’. The result of the look was classic elegance, with a cultural flair.