Is the New US Army Regulation 670-1 Unfair to Women with Natural Hair? | Natural Haircare News

Is the New U.S. Army Regulation 670-1 Unfair to Women with Natural Hair? 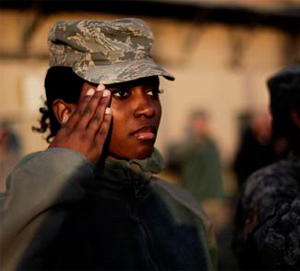 The U.S. Army’s new grooming and appearance regulation is causing quite a stir in the natural hair world. Many black women feel that the organization is openly biased against women with natural hair.

The newly revised AR 670-1 says that twists and dreadlocks are unauthorized as well as hair that protrudes more than two inches from the head. Two-strand twists and flat twists are two protective styles that many black women who wear their hair natural rely on. Locs, which the new regulation defined as ‘any matted or locked coils or ropes of hair (or extensions),’ was deemed as an unclean and unprofessional hairstyle and therefore unauthorized.

Cornrows are allowed but there are strict regulations regarding the style and size of the braids. Surprisingly, hair extensions and wigs are allowed as long as they look natural and have the same general appearance as the person’s natural hair. But if the individual’s hair is unauthorized to start with, how does wearing a lace front or weaves conform to the new guidelines?

The revised AR 670-1 is not yet officially published but a leaked set of PowerPoint slides is circulating online.

A petition was started on whitehouse.gov to call on to the US Army to correct their bias against women in the army who wear their hair natural.  The petition’s concern is as follows:

“More than 30% of females serving in the military are of a race other than white. As of 2011, 36% of females in the U.S. stated that they are natural, or refrain from chemically processing their hair. Females with natural hair take strides to style their natural hair in a professional manner when necessary; however, changes to AR 670-1 offer little to no options for females with natural hair. In the proposed changes, unauthorized hairstyles include twists, both flat twists as well as two strand twists; as well as dreadlocks, which are defined as “any matted or locked coils or ropes of hair.” These new changes are racially biased and the lack of regard for ethnic hair is apparent. This policy needs to be reviewed prior to publishing to allow for neat and maintained natural hairstyles.”

You can view the petition on whitehouse.gov

What do you think; is the AR 670-1 regulation unfair to Black women with natural hair? Is the US Army marginalizing women who have chosen to wear their hair natural?

Linkedin
Tagged with: military and natural hair • US Army Regulation 670-1