Is Natural Hair Still a Pejorative?

Linkedin
Amanda
I’m Jamaican-American; I come from a family known for having long hair. So of course when my hair didn’t budge an inch it was a disappointment. I decided to go natural after another horrible weave in the fall of 2013. My mother was opposed to the idea. However, after a bad relaxer, my mother had to do a big chop. It was inspiring for me to see a woman her age do a big chop, considering the fact that she’d been chemically altering her hair since she was in her teens. I decided that same year that I didn’t want to wait for the relaxer to leave; I wanted to give it an early eviction. In June of 2014, after several months of transitioning, I cut off my relaxed hair texture. Of course, my stylist was upset, but for the first time after many years, I saw my hair in its natural state. I’ll never forget that moment.
Latest posts by Amanda (see all) 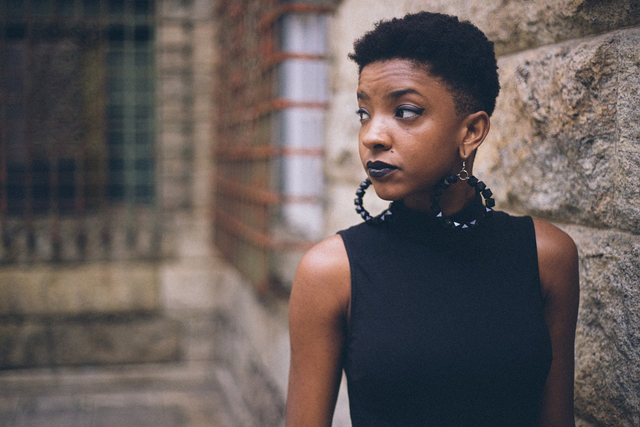 For years upon years, there has always been certain stigmas attached to the natural hair that grows forth from our roots. Perhaps our hair made us subject to bullying, maybe it hindered us from obtaining a job, possibly it was labeled as “nappy” the new “n” word of natural hair community or maybe…just maybe, it made us feel ashamed.

As funny as this sounds, I’d like to familiarize you readers with a trend that I have noticed over the decades. In the mid to late 1960’s we had the privilege of being graced with artists and black leaders such as James Brown and Malcolm X; they were very vocal in their efforts to reinstall and restore that sense of “Afrocentric” pride that was stripped from us. Then, came the infamous afro that made its appearance on television, in schools, at work, on every street and believe or not, on hairspray bottles.

The big fro was “in” and happening, then of course the lovely Chaka Khan never shied away from showing off her voluminous afro; and while White teenaged girls of suburbia tried to recreate Farah Fawcett’s hairstyle, our sisters in Southside Chicago were trying to pull off Chaka Khan’s look .

Even Blaxploitation movies promoted the “fro” trend. Pam Grier strutted around with her afro and kicked ass as “Foxy Brown”. Then, a change came about as the decade ended.

The Jheri curl made its shiny arrival. Remember the “Let your soul glow” commercial from “Coming to America”, well most people in our community were walking around with glowing hair, maybe even glow in the dark hair. The fro was out, and a looser curl pattern was in. Everyone walked around with their curl activator, and if you weren’t careful your dripping hair could perhaps ruin new furniture or soak through bed linen. The Black Panthers of the seventies were no longer the stubborn backbone of our community, but divided into street gangs such as the Bloods and Crips.

During the 80’s we witnessed the biggest moments of pop culture history. Disco music and afros were ushered out of popular culture and in came pop music of the 80’s and the mainstream birth of rap and hip-hop. Beautiful wasn’t it? However, deep seated issues still rested in our community. Spike Lee’s film “School Daze” highlighted those issues perfectly. We were reminded of the ugly rift that was ignored throughout the seventies: the difference between “good” and “bad” hair. If you didn’t have long hair with curls and waves, you weren’t the “it” girl.

You may have noticed that a large number of the actresses in Blaxploitation movies were dark-skinned women, some were rocking TWA’s and big-chops. However, with the progression of time and changing trends, those women were no longer our idols or our representations of beauty.

Sadly, we grew up as “guinea pigs” and “experiments” because of these changes. Some of our mothers sat us down in the kitchen at a young age and forced us to relax our hair, the smell of those chemicals was just nauseating and you couldn’t even get a rocket scientist to pronounce half of the things listed on the ingredient list. Your mother told you to stay still and to let the product cook so that you could look like the girl on the perm box. The subliminal message behind it was that: “I want my baby to have a better shot at life”.

It saddens me and yet it doesn’t surprise me when I hear rappers bash natural hair and poke fun at Black women who have decided to cut and regrow their hair naturally. It doesn’t surprise me when I see Black women at risk of getting their lights cut off just so they can get their weave done, in comparison to a crack addict who is willing to giving anything in their possession to their dealer. Bob Marley made a very profound statement, he told us to free ourselves from mental slavery, isn’t that something? You see little girls who are just knee-high with weaves and relaxers, is we really free?

The natural hair revolution 2.0, I like to call it, since we had one in 70’s as well is so empowering for our community. Why? Because we are slowly reconstructing the foundation of pride that somehow got lost through the ever changing world of pop culture. I didn’t mention an eccentric diva of the 80’s who managed to stand on a platform of her own, the gorgeous and iconic Grace Jones, who rocked her tapered look and made a showy display of her bold African features, and sadly enough we made mockery of her strange natural beauty. But now, we have Viola Davis, Lupita Nyong’o, Solange, and India Arie and a list of so many other women who defied the new standards of beauty in our community, the “light skin and straight, long hair” requirement.

Natural hair is still a pejorative for some people who ignorantly believe the stigmas attached to having natural hair. However, it is only when we realize that we don’t need society to validate our nappy hair that it is no longer a pejorative nor a source of shame.