The Politics of Hair: Choosing Between Straight or Natural Hair on the Job [Video] | Natural Haircare News

The Politics of Hair: Choosing Between Straight or Natural Hair on the Job [Video] 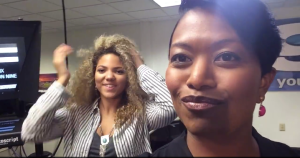 Here’s a real life situation on the topic of natural hair in the workplace that we dish about here at Natural Haircare News: The challenges that black women face every day that choose to wear their hair natural on the job.

TV anchor Angela Green with Greenville North Carolina’s WNCT TV presented a dilemma via video facing station intern, Madison Jaggers on the television station’s Facebook page. Madison, 19, a second year college student has a head full of natural curls. The dilemma presented: Does the audience think that Madison should straighten her hair for an upcoming production project that Madison would appear in? (Note: It’s not clear whether this video project is with WNCT TV).

Based on the posted video conversation, (below), Madison was told in preparation for production that her hair is “too big” and that she needs to “straighten it out”. The intern was also told that her big hair would “be distracting”.

What Do You Think?

TV anchor Angela Green’s personal advice to Madison and I’m paraphrasing: It’s what the boss wants so for the sake of the project, Madison should straighten her hair. Angela also added that she understood that this response would not bode well with many, which is why she was curious as to what the audience thought.

The video has gone viral and has sparked a wave of debate over the ongoing issue of natural versus straight hair in the workplace.