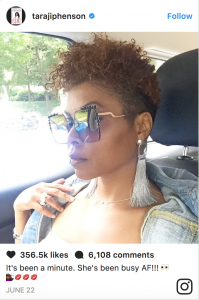 Versatile actress Taraji P. Henson has worn many looks for her many different roles. She’s had straight hair, curly tresses, and worn lengths super-long as well as short and sweet. Since many people know her today as Cookie on the television series Empire, they’ve seen her wear more wigs than they can count! While Taraji can rock a wig like nobody’s business, she mainly embraces hair enhancements for roles and red carpet appearances. In her own time, she actually likes to keep things natural.

Taraji has occasionally showed off her natural hair on social media. Although her profession requires her to don extensions or wigs for various looks, she stopped relaxing her hair way back in 2001.

The Undercut Is Everywhere

The undercut style has been big this year and ladies have adopted this look in unique ways. Some ladies sport a short cut with it, while others wear locs on top and a shaved undercut beneath. Taraji’s been sporting the undercut for a little while, but when she took to Instagram with her curls in full flow along with it, it was love at first sight for many of us. Her longtime hairstylist Tym Wallace explained that “one too many blow dries made her ends fragile,” so that’s one reason for the cut. However, Wallace also felt Taraji’s fierce new ‘do could provide inspiration to her many fans. And it does.

You don’t have to suffer from any damage to choose a chic cut like this for summer. It’s hot like the weather outside and very modern. When we see big names like Taraji rocking natural looks like this, it proves that our hair can be just as mainstream, appropriate and acceptable as any other hair texture. Sure, the next time we see her as Cookie or on another role on the big screen, her hair will be different. She might be wearing a wig or extensions; it’s her job to take on different personas. But it’s cool knowing that off-screen, she seems very much like us, including loving her natural hair.