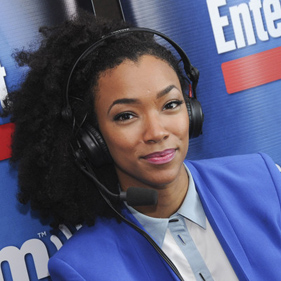 Actress Sonequa Martin-Green graced the cover of this month’s issue of Entertainment Weekly for her role in the new Star Trek Discovery series, and yes, she was rocking her natural hair! The former “Walking Dead” star was elated about her groundbreaking role on the Star Trek series reboot.

Martin’s hair was styled in twists that were up in a pompadour. She was dressed in a gold and blue suit with her hands in the Vulcan salute. The actress shared the cover of Entertainment Weekly with three of her Star Trek Discovery co-stars Douglas Jones, Anthony Rap, and Mary Wiseman. Martin’s position on the cover is representative of the fact that she is the first Black woman to have the lead role in Star Trek’s history.

The Entertainment Weekly article titled “A Star Fleet is Born” told the history behind the making of the  Star Trek Discovery series. Martin will play the character, Michael Burnham. In the CBS All Access series Star Trek Discovery, Martin will play “A Vulcan-raised human Starfleet first officer who serves under the command of Michelle Yeoh’s Captain Philippa Georgiou” (pg.  26).

One might wonder how Sonequa Martin-Green is handling the pressure of leading a multi-million dollar franchise. She told Entertainment Weekly, “For me the important thing is the knowledge we’re here for a reason and doing something that will hopefully make a positive impact” (pg.29). Well done, Mrs. Martin. Making history is great, and rocking your natural hair while doing it is a bonus!