Kelis Gives Herself a New Haircut! 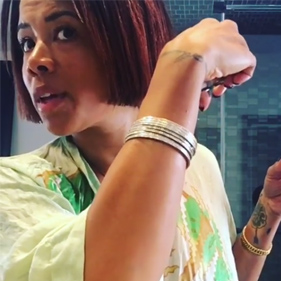 “Milkshake” singer Kelis gave herself an impromptu haircut right before catching a flight. She started off an Instagram video addressing her stylist saying, “Maisha, don’t freak out but I just decided to cut my hair.” Celebrity stylist Maisha Oliver maintains the singer’s hair.

The courageous singer said after flat ironing her red-highlighted strands, she noticed her ends just weren’t having it. Kelis said, “They were just like “stop.”They were so bad.” She does admit she is not afraid of bleaching, coloring, and styling her hair, but she knows it can damage it. Kelis cut about one-and-a- half to two inches of her hair off.

Kelis is known for her often bold and forever changing looks. I remember when she first came out in the late 90s with “Caught Out There”. She rocked a blonde, orange, and red fro on the video:

Most of her fans loved her new cut and praised her for her bravery. One fan said, “Why are you cutting your own hair?! Oh!! Because you can. My hair would be uneven every where!! Good Job!!” Another fan commented, “ I don’t know about this one.”  Someone else said, “Can’t wait to see it curly,” and we can’t either!

Three weeks ago, Kelis revealed her first haircut which was similar to the current one except it was longer, and the back was shaved with a red heart in the middle.

Besides going on her hair adventures, Kelis has been cooking up a storm in the kitchen. In 2015, she released her own cookbook called My Life on a Plate : Recipes from Around the World. She is also currently on tour.

We’re looking forward to what she does next with her natural hair!

What do you think of Kelis’ new haircut?