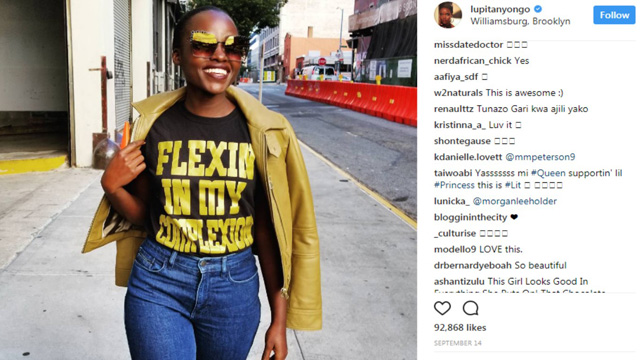 Lupita N’yongo fully supports young entrepreneur, model, and fashion icon Kheris Roger’s “Flexin’ In My Complexion” cause, and we think that is awesome! Last year, 10-year-old Rogers brought everyone to tears when her story of being teased because of her dark skin was shared through multiple media outlets.

Now, Rogers is celebrating herself and all the little girls like her with her ‘Flexin in My Complexin” t-shirt line she launched earlier this year. CBSLA News reported that after being teased, her older sister posted a picture on social media of Kheris with the hashtag “FlexinInHerComplexion”. After gaining support from people around the world, Kheris Rogers’ “Flexin’ In My Complexion” campaign was born.

Recently, Lupita posted a photo on Instagram of her wearing blue jeans and a black shirt with Rogers’ message in yellow writing. The model topped the look off with a mustard yellow jacket and black shades. Lupita said, “I see you, I feel you, I support you… And I love my shirt!” She also told Rogers that she was “beautiful by ANY STANDARDS.” The little girl thanked N’yongo on her page and said, “Beauty has NO shade. What is on the inside is what makes you beautiful.” We can feel the love and black girl magic!

Since Rogers began her “Flexin’ In My Complexion” campaign, it has gained support from other celebrities like Alicia Keys, Drake, Lena Waithe, and more. Last week, Rogers was a guest on the Steve Harvey Show. She also attended New York Fashion Week this past September.

Lupita and other celebrities’ support of Kheris’ Rogers message is very important because it shows the need for every shade of Black to be celebrated. Plus, Nyong’o and Rogers both rock their natural hair. Kheris Rogers can be seen rocking buns, puffs, and big curly fros!

Linkedin
Tagged with: celebrities with natural hair • Kheris Roger’s “Flexin’ In My Complexion” • Lupita Nyong’o • natural hair and self esteem • teaching children to love their hair