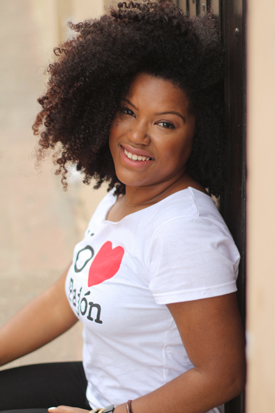 Salon owner and natural hair blogger Carolina Contreras, also known as “Miss Rizos” is still making her mark in the natural hair community in the Dominican Republic. Some of you might remember that she was featured in the Natural Hair Care News podcast 0017 titled “The Natural Hair and the Latino Perspective with Carolina Contreras of Miss Rizos.com”. Contreras now has her own salon!

The entrepreneur and her salon “Miss Rizos” were featured in a Great Big Story  video. The belief for many years in the Dominican Republic, like the African-American community in the United States, was that straight hair and light skin were best. In our podcast, Contreras shared with us that she was approached by her peers while laying on the beach and told not to lay in the sun because she would ‘get dark like a Haitian.’ This belief of inferiority still exists today.

In the video “Untangling the Roots of Dominican Hair” Contreras and her stylists (who are also natural) are shown doing natural hairstyles like twists and rodsets. Contreras described the heartbreaking experience of not being allowed to enter a bar because of her natural hair. This was before she opened her salon.

In 2010, Contreras decided to go natural. She received mixed reactions from different people in the Dominican Republic. She said, “Some of things I would hear back then is like ‘did you forget you comb at home?’” Other women were mesmerized by Contreras natural hair and asked her questions about how to style and maintain it. “There was this huge thirst and hunger where women would be validated, and then that led to the space that I’m in now”, she said.

Susan Contrera considers herself an activist for women with natural hair. Her message has been heard all around the world. Since being featured on our podcast and Great Big Story, the entrepreneur has been featured on several media sites including The Huffington Post, Vibe, NPR, and BuzzFeed.